We are currently operating reduced services due to COVID-19. Click Here to find out more.

Menu
We are currently operating reduced services due to COVID-19. Click Here to find out more.

Menu
We are currently operating reduced services due to COVID-19. Click Here to find out more.

The Tower of London

The Tower of London takes its name from the White Tower which was constructed in around 1078 by William the Conqueror. Over the last 900 years the Tower of London has served a number of uses including a fortress, armoury, royal palace, royal mint, treasury, menagerie, prison & more recently the home to the crown jewels. The Tower is guarded by the Yeoman Warders who were formed by King Henry VII in 1485.

The Tower of London’s origins start with the Norman Conquest of England. After Edward the Confessor died childless in 1066 England was plunged into a succession crisis. King Edward’s brother in law Harold Godwinson was crowned King Harold II on the 6th January 1066. Harold was the first king to be coronated in Westminster Abbey which had been constructed by Edward the Confessor & consecrated on the 28th December 1065, only eight days before Edward’s death. Harold’s succesion was contested by King Harald Hardrada of Norway who invaded England in August 1066. Hardrada’s army burned the town of Scarborough to the ground & conquered the city of York before they were defeated by Harold II’s forces on the 24th September at the Battle of Stamford Bridge.

William Duke of Normandy contested Harold’s claim to the throne & claimed that the late King Edward had promised the throne to him instead. William prepared a large invasion force & landed in Pevensey, Sussex on the 28th September. King Harold’s army was weakened from the battle at Stamford Bridge & had to quickly march South to meet the Norman invasion force. After arriving near Hastings Harold’s army set up defence positions on Senlac Hill (present day Battle in East Sussex) on the 14th October.

Little is known of the events of the Battle of Hastings but it is generally agreed that William marched his army from their Norman fortifications to meet the English army. The battle commenced at around 09:00 & lasted for most of the day (a long battle by medieval standards). The decisive event of the battle was the death of King Harold although it is unknown how the King was actually killed. Some say he was killed by an arrow through the eye whereas other sources claim he was killed by Norman knights. The Norman victory at Hastings marked the end of Saxon rule over England, Norman Kings would reign for the next 88 years.

Click the link below to visit Historic Royal Palaces’ website & learn more about the Tower of London’s rich history. 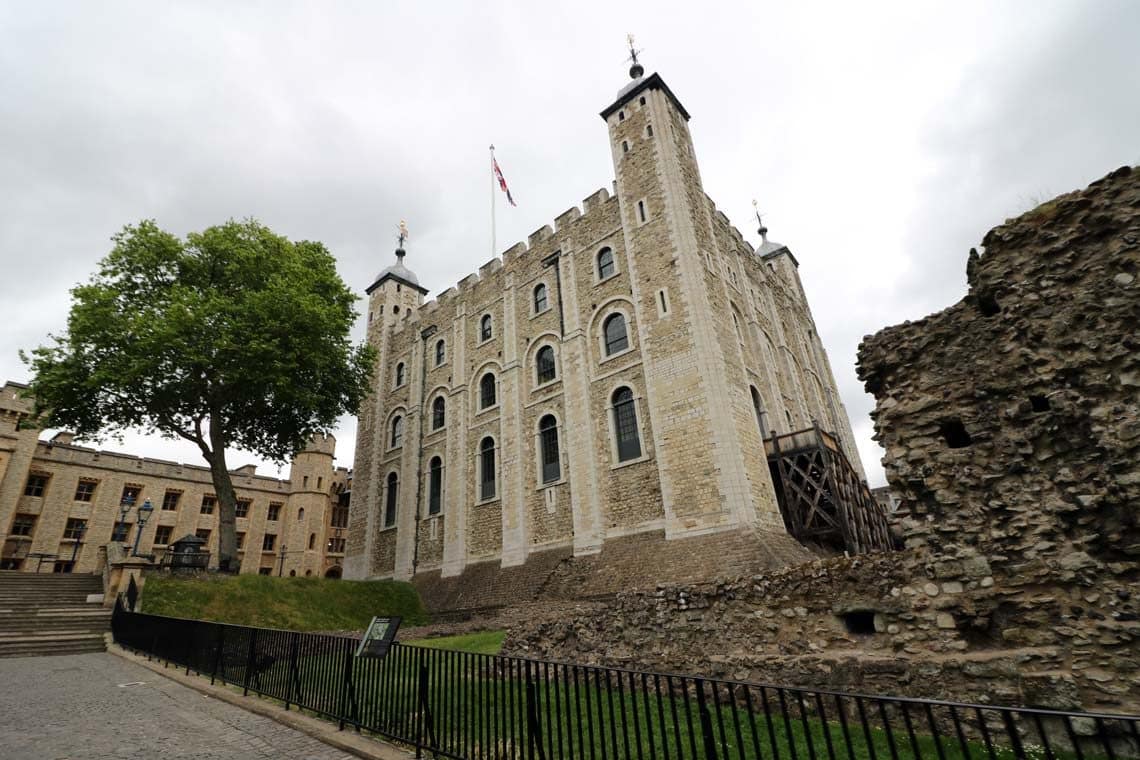 The White Tower, constructed by Gundulf Bishop of Rochester

Explore the Tower of London

About the White Tower

William Duke of Normany was crowned King William I on the 25th December 1066 at Westminster Abbey. King William quelled numerous rebellions during his reign & built over 80 castles to strengthen his control over the English. The most famous of William’s castles would become the Tower of London. The original Norman fortress in London was a timber structure utilising the old Roman walls & the River Thames. The stone White Tower was started in 1078 & was designed by Gundolf, Bishop of Rochester. Gundolf was a Norman monk who travelled from Normandy to England after the conquest. Gundof was appointed Bishop of Rochester in 1075 & is also responsible for the castles at Rochester & Colchester.

The Waterloo Block & The Crown Regalia (The Crown Jewels)

About the Crown Regalia

The Crown Regalia (more commonly known as The Crown Jewels) have been used at the coronations of the Kings & Queens of England since the accession of Charles II in 1661 however the oldest items in the regalia date from as early as 1150. As a working collection the Crown Jewels have fascinated the public since they were first displayed in 1669 however in 1671 Colonel Thomas Blood attempted to steal the jewels from the Tower.

Travel to or From the Tower of London by Boat

All six royal palaces are open to the public & are brought to life through tours, historic events & exhibitions such as the famous Ceremony of the Keys at the Tower of London or architecture tours at The Banqueting House.